After 15 years of research, a psychologist says this ‘simple trick’ can help millennials retire faster

By the time most of us reach retirement age, we feel as if we don’t have enough money to live the life we envisioned.

Our feelings aren’t wrong: a 2019 analysis from the Employee Benefit Research Institute found that over 40% of American households in which the official head is between their mid-30s and mid-60s are projected to run short of money in retirement.

The figures are especially concerning when it comes to millennials (or those currently between the ages of roughly 24 and 39). According to a 2018 report by the National Institute on Retirement Security, 67% have nothing saved for retirement at all.

But there’s a way to fix the problem. As a social psychologist who has been researching perception and motivation for 15 years, I’ve found that, when it comes to financial challenges, narrowing your focus can push you — mentally, at least — to the retirement finish line faster.

‘The future seems so far away’

A major reason for the big disconnect between what we will need and what we end up having is that so many of us start to prioritize retirement savings too late in life.

That’s a shame, because starting earlier, rather than making up for lost time later on, is generally a more lucrative rule of thumb. All else held constant, thanks to compound interest, a 22-year-old who sets aside $100 a month will enter retirement with a larger nest egg than someone who puts in five times as much each month, but starts saving 20 years later.

To get a better handle on why younger people set aside so little — if any — income for retirement, I took an informal poll of students I was teaching one semester. Even though they all had jobs, 55 out of 60 said no when asked if they were saving for retirement.

When asked how often they think about retirement, the popular answers were “not often” and “maybe once or twice a year.” The main reason can be summed up by one student’s response: “The future seems so far away.”

I wanted to see if I could change their perspective — by getting them to see their future retired self as closer and more relevant to the person they are now. Perhaps then the future itself would not seem so distant.

So I took photographs of their faces and, using computer imaging software, blended each face with that of an older celebrity. Then I made an animation for each student, depicting the transition from current self to future self.

After handing out their headshots, I asked each student to write down what they hope a typical day in retirement would entail, and how they’d like to spend their time at that point in their lives. Then I asked, “Would you start saving for retirement now?”

They all said yes.

My project was based on a real experiment conducted in 2011 by social psychologist Hal Hershfield, who found a way to introduce young people to their future selves.

Participants were divided into two groups. Hershfield morphed photographs of the first group into an aged version of what they might look like in 45 years time. After taking some time to analyze their pictures, they said they wanted to set aside an average of 6.2% of their current salary for retirement. The other group, which only saw photographs of their current selves, set aside 4.4%. 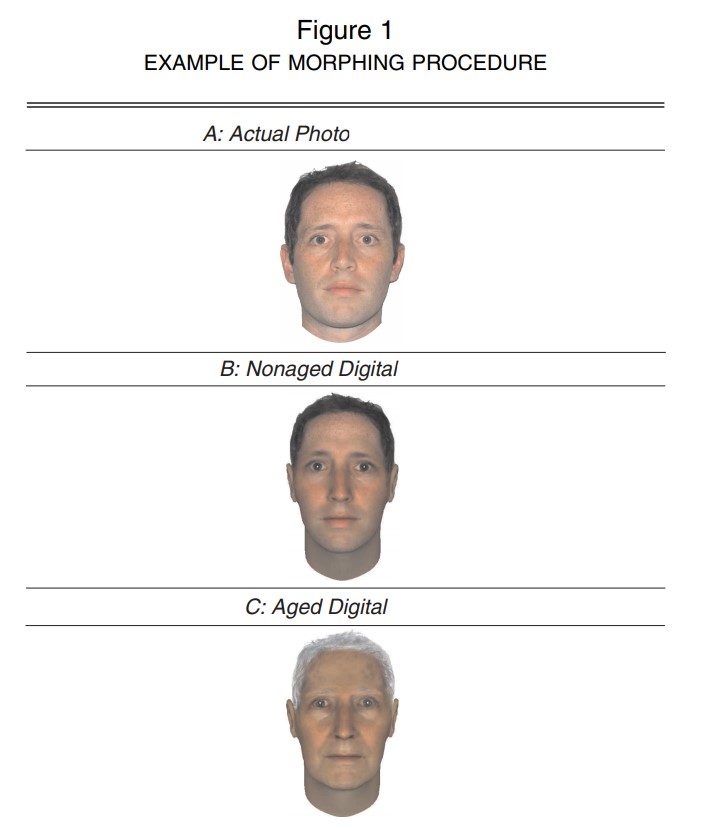 In a second study, Hershfield created aged avatars of college students so they would see themselves as 45 years older, but also interact with other people in a virtual environment.

After giving them a few minutes to take on the form of their future selves, Hershfield told them to imagine receiving an unexpected $1,000. “How much of that money would you use to open a checking account, buy something nice for someone special, plan an extravagant vacation or invest in a retirement fund?” he asked.

Compared to a group of students who only saw an avatar depicting their current self, those who took on the role of their aged self set aside more than twice as much for retirement: an average of $172 out of the $1,000 windfall.

Our eyes work in conjunction with our brain

Narrowing the focus of our visual attention — and seeing our future as part of the here and now — helps us make choices in the present that are more aligned with the people who wish to become.

That’s because when we focus on the future, we thereby contract the distance separating that far-off goal from the starting line we’re standing at now. It’s a simple trick that can truly go a long way in improving your odds of financial success.

Emily Balcetis, PhD, is an associate professor of psychology at New York University. She is the author of “Clearer, Closer, Better: How Successful People See the World” and more than 70 scientific publications. Emily has lectured at Harvard, Princeton, Yale and Stanford, among many others. Her work has been covered by Forbes, Newsweek, TIME, NPR, Scientific American and The Atlantic.